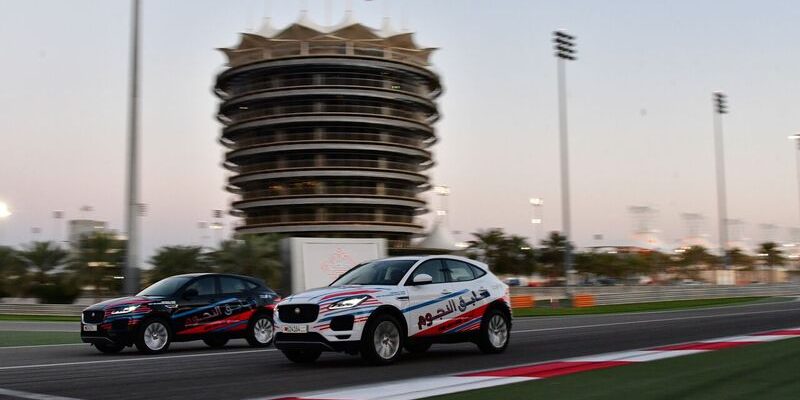 Euro Motors, the exclusive importer and distributor for luxury automotive manufacturer Jaguar Land Rover in the Kingdom of Bahrain, proudly announces its collaboration with Bahrain International Circuit (BIC), for the 2018 Bahrain Grand Prix, that will be held from the 6th to 8th April 2018.

For the fourth consecutive year, Euro Motors Jaguar Land Rover has partnered with BIC to provide 5 luxurious vehicles which include 2 Jaguar E-PACE and 3 Range Rovers. The five F1 branded vehicles will be used in BIC promotional tours that will see them being driven around a number of locations in the Kingdom to effectively build up hype leading up to the fastest race in the world.

Elaborating on the strategic collaboration, the General Manager of Euro Motors, Mr. Stephen Lay, said: “We at Euro Motors Jaguar Land Rover are extremely proud to announce that for the fourth year running we are collaborating with BIC to be the prime vehicle providers for the BIC promotional tours, which will run up until the first day of the racing spectacle. The 2018 Bahrain Grand Prix is one of the most significant events during a calendar year in the Kingdom and contributes substantially to a number of sectors including, the economy, the tourism sector, the motorsport sector amongst others. Being constantly affiliated with such a glorious event stands testament to the unrelenting ambition of Euro Motors Jaguar Land Rover to positively contribute in every way to the advancement of the Kingdom of Bahrain.”

“This is the latest in a long line of strategic partnerships that Euro Motors Jaguar Land Rover has undertaken with BIC, which in turn serves to strengthen our brands and position them as vehicles of choice. As the Grand Prix gets bigger, bolder and more colorful with each passing year, our involvement will also continue to enrich the experience the Jaguar Land Rover way. We hope that this successful venture spurs both parties to more such partnerships in the foreseeable future,” he added

Apart from the main race that will be held on the 8th of April 2017, the three-day event will also comprise of two highly competitive racing series from across the globe including the FIA Formula 2 Championship, formerly known as the GP2 Series, and the Porsche GT3 Cup. Along with the races, guests will be treated to a number of exhilarating performances over the three days. This year’s off-track entertainment will be headlined by legendary, Grammy award-winning superstar, Carlos Santana, who will be performing for the very first time in the Kingdom.

Guest will also be treated to a number of roaming acts, musical and dance performances as well as a circus performance by Cirque Africa. Over the course of the three days, visitors will be able to tap into their thrill-seeking side by participating in a wide range of extreme rides like the Sky Coaster, Reverse Bungee and SCAD Freefall.

Since the start of its operations in 1998, Euro Motors has successfully positioned itself as the leader in the automotive industry in the Kingdom of Bahrain. Continually striving to attain the highest standards, Euro Motors does not compromise on presentation, quality, technical service or customer care in accord with its belief in offering the utmost to customers.